What is the Northern Vigor?

Take two cuttings from a single potato plant in a lab. Plant one cutting as far north as possible, in Alaska or central Alberta.

Plant the other in California.

When the plants are grown, harvest the tubers and plant them as seed in the same field in Idaho.

Genetically they are identical. The only difference is that one seed was grown in the north, the other in the south. But the seed potatoes which came from the north, will yield nearly 30 per cent more.

Why do genetically similar plants vary in production, based on the latitude in which their predecessors were cultured?

This unusual phenomenon is called “northern vigor” and scientists believe that the long summer days in the far north produce potatoes with more robust sugars and enzymes, and more productive power. While the growing day in June for seed potatoes grown in the Northern U.S. may end at 9 p.m., potato plants in Central Alberta are in full daylight for at least another hour, and even at midnight the sun glows faintly in the North.

Why buy your seed from a producer so far North?

You get the maximum benefit of Northern Vigor, caused by the long summer days in Central Alberta. While the growing season is long enough to grow potatoes, it’s bitterly cold during the winter. With temperatures dropping to -40° on some winter nights, it’s too cold up here for man or microbe. Well, the people survive, but microbes haven’t discovered down parkas yet. Combine these two factors with advanced seed potato production and handling facilities and you have some of the finest seed potatoes grown in the world. 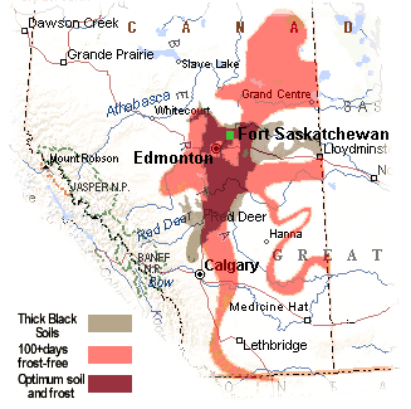 Norbest Farms is in a unique growing area for potatoes.

The map shows a red shaded area. That’s the area of Alberta which averages at least 100 frost-free days each year. There’s another dark shaded area on the map. That shows the region of “Thick Black Soil” in Alberta. Fort Saskatchewan (marked in green) is at the northern end of this area of rich soil. Go much further north and both the soil and climate make it difficult to grow potatoes.